Friends have been more intelligently discussing the finer points of MMOs. My buddy Brandon asked for my opinion on Tera, giving me a chance to explain how I judge MMOs -- especially since I haven't played that one yet!

Here are the personal interests through which I evaluate such games.

In most MMOs to date, the UI is your abstraction of the world. Those minutes you sink into the game yield, to you as an end-user, an icon in a box on the screen. These are your avatar's actions, your earned goods, your gear.

I believe that minimizing or streamlining this aspect of the MMO product is one of the biggest gains possible for gameplay experience, because immersion is usually more accessible when less interface actions stand in the way of the user's intention. This is personally a general software principle, not just a games principle.

That point could fill its own piece, but it conveys how I think Aion does it best right now. 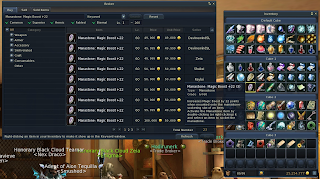 Aion's "broker" feature; WoW's "Auction House" equivalent
Tera, like Aion/World of Warcraft/EVE Online/Spiral Knights/Rift/Star Wars: The Old Republic/Guild Wars 2/whatever, will have those common features that are involved in basic MMO game societies. Each of Tera's features will be evaluated against my favorite implementation when (or if -- is Tera free?) I play the game.

All game companies have producers that can look at Aion and say "we should not do something worse than the fundamentals here.". Especially with its going free, there is no excuse for an inferior user experience than the aforementioned.

If Tera does worse, I will think it is a worse game in that respect. In the end, it's all about the game, all about immersion. Get your game's interface out of the way.

Here are a few UI features that I subject to this sort of examination, along with the games that can be looked at when saying "Who rocks that?".
Auction House (Buying, Selling.)

"Currency" Tracking and Limitations (This made me stop playing SW:TOR.)

Player-to-Player Trading (No one really does this unpleasantly, nor awesomely)

* I recognize that this seems like an odd note, but searching for the item again -- via the textbox -- actually yields no new listings that were made between when you searched the REQUIRED option and when you typed something for which to search. I verified this by putting up one of the items I was searching for and then searching for it -- the game seemed to use only a local cache of the results from a time before my text submission, never finding my new listing!