Skip this introductory blurb for steps!


A common problem in engineering that (race card, activate!) hinders minorities from immediately accessing a culture of engineering is the practice of searching.  Yes, really.  Back in college, a black buddy and I went to our CSCI professor's office hours to ask about the class content.

He told us to go to google.com and typed in exactly what we asked him.

She was livid and we were both pretty insulted.  It was pretty lame, but I understand his mindset, today: there are lots of people that grew up with everything they needed to learn how to build stuff. Experienced adults and professionals and their recommended resources are great supplements for learning industry-level creation.  Those people know how to search for the right terms that put them down the right road to get a solution.

Today, when I go to search for how to create a .jar file from scratch, a Google search yields parts of processes that assume I've set up my environment with Eclipse or Ant, that I know how to run a command from the terminal, that I know the terminology used at Oracle's documentation, or some other thing a cool programmer might have shown me or berated me about on IRC.  I do know these things, but my younger compadres in El Monte that haven't gone to USC might not, if they were anything like me.  To give an end-to-end depiction, I'm listing my discoveries below.

Disclosure: the above also means that I don't know how to do everything I'm outlining below.  I'm going to figure it out and you're coming with me.  Your mileage may vary, so don't blame me if it doesn't work.  At the end, it'll have worked for me, pal!

Rudeness disclosure: if you're an experienced programmer, some of my language will offend you because it's going to sound so lazy. That's okay.  I really just want what you do: good practices and good technology. Unfortunately, I'm really critical of how things have ended up, so I'm going to sound like an annoying UX designer and point out every single inconvenience as if it's something an ignorant, uncaring jerk would have implemented.  You have been warned.  What's that you say?  Why don't I change it myself?  Because, somehow, we've screwed ourselves even at a meta level.  It's better to at least berate implementations that came before me about these problems so the next generations make things incrementally better, for now, until I start a company to improve engineering accessibility.

Steps: How to Create A .JAR from Scratch (On An Apple (sucks) Mac)


2. Get Eclipse.  It's like Microsoft Word but for code instead of essays.
3. Set up your code that will become your JAR file.  This is like opening a new Document in Microsoft Word, but with a lot more convoluted steps that you need to do before you can actually get anything in a practical state to work. 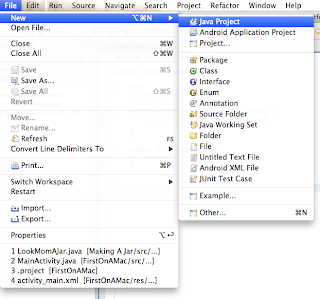 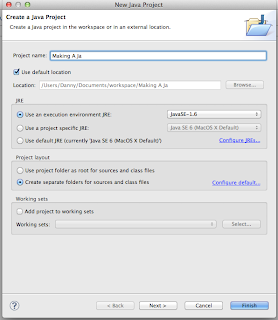 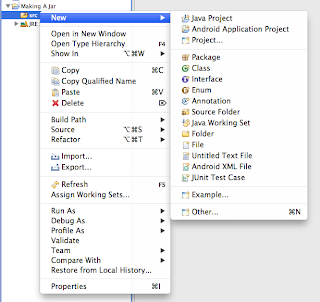 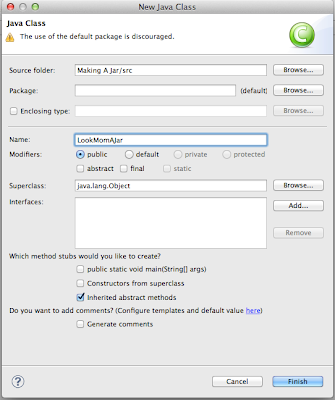 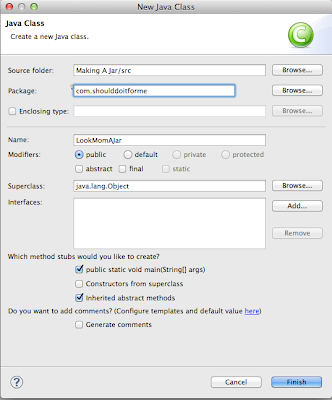 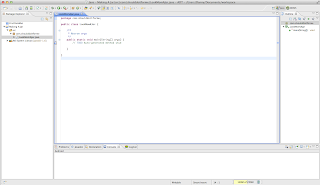 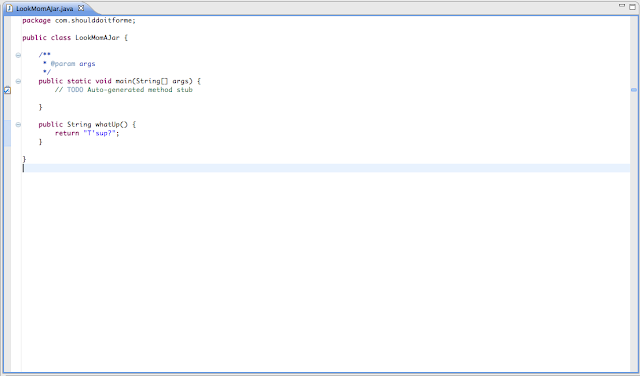 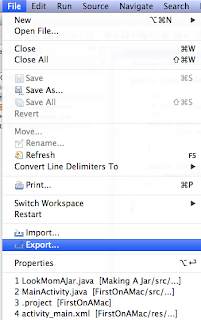 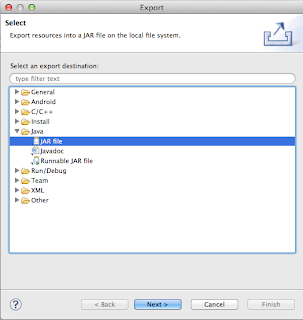 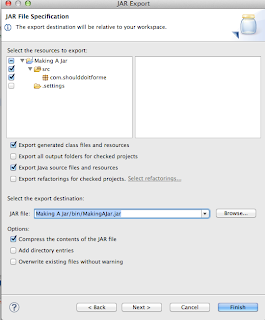 The reason I'm discovering this is because I need to get a JAR into Unity.  I don't know how to do that with ours, so creating a JAR from scratch -- where I know everything about its creation -- seems like a good start.  Now I can use this JAR against the instructions for getting it into Unity, which involves all sorts of fun JNI nonsense, and then repeat that process with the "real" JAR file that I want to use in Unity.

That's how you make a JAR, folks, but I don't know how good it'll be for practical usage.  Will it work with my Unity case?  I'll find out!  Do you already know?  Let other people know in the comments and chime in on whether or not something is wrong with the steps here!

Posted by Danny Favela at 5:47 PM No comments: